The Passive House Planning Package (PHPP) (order here) contains everything necessary for designing a properly functioning Passive House. The PHPP prepares an energy balance and calculates the annual energy demand of the building based on the user input relating to the building's characteristics.

The main results provided by this software programme include:

The PHPP consists of a printed manual and a corresponding CD. The manual not only elucidates the calculation methods used in the PHPP but also explains other important key points in the construction of Passive Houses. The actual PHPP programme is based on Excel (or an equivalent spreadsheet software programme) with different worksheets containing the respective inputs and calculations for various areas. Among other things, the PHPP deals with the following aspects: 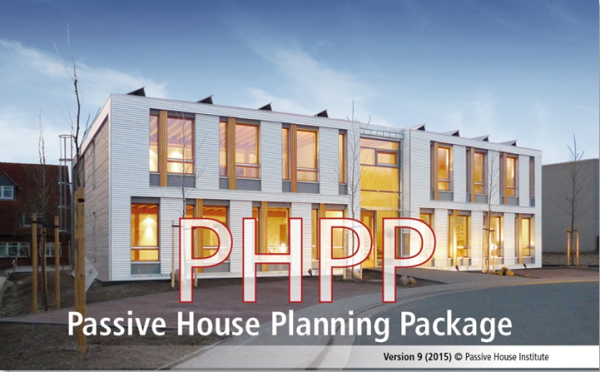 The calculations are instantaneous, i.e. after changing an entry the user can immediately see the effect on the energy balance of the building. This makes it possible to compare components of different qualities without great effort and thus optimise the specific construction project - whether a new construction or a refurbishment - in a step-by-step manner with reference to energy efficiency. Typical monthly climatic conditions for the building location are selected as the underlying boundary conditions (particularly temperature and solar radiation). Based on this, the PHPP calculates a monthly heating or cooling demand for the entered building. The PHPP can thus be used for different climatic regions around the world.

All calculations in the PHPP are based strictly on the laws of physics. Wherever possible, specific algorithms resort to current international standards. Generalisations are necessary in some places (e.g. global established routines for shading), and sometimes deviations may also be necessary (due to the extremely low energy demand of Passive Houses, e.g. for the asymptotic formula for the utilisation factor), while for some areas there are no internationally relevant standards (e.g. with reference to dimensioning of ventilation systems). This approach has resulted in an internationally reliable calculation tool with which the efficiency of a construction project can be evaluated more accurately than with conventional calculation methods. (Read more about this in the section PHPP - validated and proven in practice)


The PHPP forms the basis for quality assurance and certification of a building as a Passive House or an EnerPHit retrofit. The results of the PHPP calculation are collated in a well-structured verification sheet. In addition to the basic components of the PHPP already mentioned, various useful additions have also been made for the user's benefit. For example, the simplified calculation method based on the German energy saving ordinance EnEV has been integrated into the PHPP. Preparing an energy performance certificate for a project is facilitated by an additional tool.

The PHPP can be used all over the world and is now available in several languages (PHPP in other languages). Some of the translated versions contain additional calculations based on regional standards (similar to the German EnEV) in order to allow use as official verification of energy efficiency in the respective countries.

The first edition of the Passive House Planning Package (PHPP) was released in 1998 and has been continuously further developed since then. New modules which were important for planning were added later on, including advanced calculations for window parameters, shading, heating load and summer behaviour, cooling and dehumidification demands, cooling load, ventilation for large objects and non-residential buildings, taking into account of renewable energy sources and refurbishment of existing buildings (EnerPHit). The PHPP is continuously being validated and expanded in line with measured values and new findings.

All details on the individual PHPP worksheets can be found in the printed manual. A few explanations are provided under the following links and on the website of the Passive House Institute:

The Passive House Planning Package (PHPP) (order here) is a design tool which enables architects and designers to professionally plan and optimise their Passive House design. The PHPP contains dimensioning tools for windows (with regard to optimal thermal comfort), home ventilation (with regard to optimal air quality with adequate air humidity) and building technology. The PHPP treats the entire building as one unit including the ventilation system and other mechanical systems. The PHPP manual doesn't just restrict itself to explaining the input data required for the worksheet calculations, but also provides numerous tips for optimised arrangement of building components (in an airtight, thermal bridge free and cost-efficient manner), as well as for the planning process and quality assurance.

How to calculate the maximum heat load

PHPP - validated and proven in practice

To the PHPP affiliated tools

PHPP calculations for the Southern Hemisphere

Click here to find more tools (in German language) that are available for free on the website of the Passive House Institute.