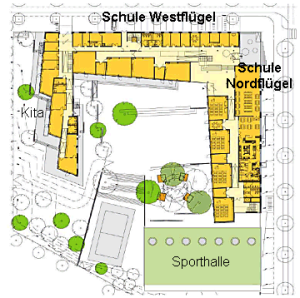 The Passive House concept has been undergoing a rapid expansion in the last few years, also in the non-residential sector. Administrative buildings, factory buildings, community centres and many other buildings have been realised. Some initial projects have also been realised in the area of new school construction and school modernisation. The systematically examined boundary conditions for the construction of schools were published in 2006 within the framework of the Protocol Volume “Passive House Schools” in the “Research Group for Cost-efficient Passive Houses” [Feist 2006] . Experiences with initial projects that have been realised were also incorporated into this.

With the Riedberg school and day nursery, the City of Frankfurt is now moving in the direction of the Passive House Standard. The resolutions of the City Council in the year 2002 already stated that “all future kindergartens and schools will be built in the Passive House construction method”. These decisions were repeated in the urban administration report of 2003 and in the coalition agreement of 2006. The emphasis here was on the improved quality of air with low CO2 concentrations and the lower running costs with significantly improved climate protection.

Amongst other things, the aim of the systematic study of this particular school that has been realised is to verify the success of the implementation of this decision. Additionally, the accompanying research had some other focal points like the inspection of a ventilation system, the energy-relevant effects of door opening processes in the entrance area and the examination of the effects of insulation aprons in large buildings. The results relate to important controversial issues. With this report, answers have been made available for further projects. This research was made possible due to commissioning by the City of Frankfurt am Main and funding by the German Environmental Foundation (DBU).

The Passive House primary school and day nursery in Riedberg Frankfurt a.M. was opened in November 2004 after a construction period of only 14 months. The building with a dual-field sports hall was based on the designs created by the architects 4a from Stuttgart. The extra costs for achieving the Passive House Standard were a moderate 5.3 % in comparison with the currently valid EnEV (German energy saving regulations) standard. Besides the planning consultation and quality assurance during the implementation phase, accompanying research was also carried out on behalf of the City of Frankfurt by the Passive House Institute. Data acquisition was carried out over a period of about 30 months and supplemented by numerous special measurements.

Results of the measurements

There were high ratings for the thermal comfort in classrooms during the winter, the indoor air and indoor surface temperatures differ only slightly from each other. In the winter of 2005/2006, the temperatures were between 19.5 and 20.6 °C during usage periods (8:00 to 13:00 o’clock). The relative humidity of the air was low but still within an acceptable range.

During the summers of 2005 and 2006 that were studied, the hours of overheating in the classrooms on the ground floor were considerably less than the admissible limit values. Mostly, the temperature limit of 27 °C was not achieved, for 10 % of the usage period, it could even be exceeded. In the warmer summer of 2006, the average summer temperature during the usage period was 22.9 °C. On the whole, good summer comfort could be proven and thus also the effectiveness of the summer ventilation concept with two facade shutters for each classroom. Therefore, in correlation with the project planning, an air conditioning system was not necessary.

An acceptable quality of indoor air with 16.4 m³/h/person can be achieved during lessons if the ventilation systems are operated appropriately. The measured concentrations of CO2 were almost always below the limit value of 1500 ppm. The actual air changes were measured using a tracer gas test. The designed value ranging between 15 and 20 m³/h/person at the most that was recommended in [AkkP 33] could thus be confirmed through the measurements in practice.

The ventilation system produces a good result with a heat recovery rate of 84.2 % for the practical measurement during the winter period. The electrical efficiency criterion is thus maintained at 0.43 Wh/m³. Due to the length of the cold ventilation ducts through the building, the effective heat recovery rate unfortunately decreases to 74 %. This shows that cold ducts leading through the building should be as short as possible even if they are insulated.

The heating consumption of the school and day nursery including that of the kitchen showed very low values of 25.4 kWh/m² in the winter of 2005/2006, with savings of around 90 % in comparison with other existing schools. In the kitchen, energy was unnecessarily consumed by addition ventilation; the consumption was 22.0 kWh/(m²a) if this is not taken into account. In the mild winter that followed, the consumption was only 14.5 kWh/(m²a). The reason for a previously existing excessive consumption in comparison with the planned value could not be fully explained, despite the taking into account of the lower occupancy rate, the thermal charge of the ground in the first years (insulation apron approach), the drying out of the building and the lack of some optimisations.

The treated floor area (TFA = 5541 m²) was used as a basis for the whole analysis. The area AN with 9037 m², that is determined by the EnEV (German energy saving regulations) is greater by 63 %. This has not been used here.

As expected, the daily average heating outputs were low with a maximum of 12.2 W/m² for the school and 15.1 W/m² for the day nursery.

About the TFA and AN areas, see the section: See also.

The annual electricity consumption for the school/day centre/kitchen is 13.6 kWh/(m²a) without the electricity for the ventilation, which amounts to 5.8 kWh/(m²a) in the financial year.

The energy balance results in:

The requirements for the Passive House Standard are therefore more than fulfilled (maximum primary energy 120 kWh/(m²a)).

In statistics for 177 existing schools, the heating consumption was greatly scattered with an average value of more than 200 kWh/(m²a). In comparison with this, the measured heating energy consumption of the Passive House school on the Ridberg in Frankfurt was less than 23 kWh/(m²a) – an enormous saving of over 90 % with regard to the energy consumption, heating costs and also environmental impact. In relation to the overall primary energy consumption, a large saving of more than 2/3 was also achieved – even when compared with new school buildings which meet the requirements of the German Energy Saving Ordinance (EnEV) ([Peper 2007] ).

The admissible limit value for primary energy based on the building volume is 18.3 kWh/(m³a) in accordance with the German Energy Savings Ordinance (EnEV). This value takes into account only the heating energy and the auxiliary electricity as well as the electricity for the ventilation. The corresponding measured value is given by 5.8 kWh/(m³a). The limit value based on EnEV 2004 is considerably less - by 68 %.

The accompanying research has shown that the objectives of the project were met. The results were a high level of comfort with energy savings of 90 % and a very good assessment of the primary energy. The quality of the indoor air - measured as the concentration of CO2 - during the operation of the ventilation system was good all throughout. The results of the Passive House schools study [AkkP 33] have been confirmed by this evaluation.

[Bretzke 2005] Bretzke, A.: Planning and Construction of the Passive House Primary School in Kalbacher Höhe 15, Frankfurt am Main, 2005: Technical article Riedberg (in German)