Why PHI is not using adaptive comfort models


A common definition of thermal comfort is given in [ASHRAE 55] as ”that condition of mind that expresses satisfaction with the thermal environment“. There is general agreement that the main external physical parameters which determine thermal comfort are air temperature, radiative temperature, humidity and air velocity. The right combination of these parameters depends mainly on a subject’s activity and clothing.

There are currently two fundamentally different approaches in the judgement of thermal comfort: The first are the heat balance models, which basically assume that thermal comfort is achieved if the body temperature can be held in a narrow range, skin moisture is low and physiological effort of regulation is minimized ([ASHRAE 2005]). These models have been developed in huge, carefully controlled laboratory experiments. They resulted in the international standard ISO 7730 which allows for the calculation of the predicted mean vote, PMV.

The heat balance models have also been confirmed by many field studies, mostly in air-conditioned office buildings in which the predicted comfort temperatures have actually been achieved.

Since the beginning of the 1970s, so-called adaptive comfort models have slowly gained importance. These models claim that a much broader temperature range is considered comfortable by users of free-running buildings because they can adapt to varying boundary conditions. Depending on the study, comfort temperatures up to 35 °C are predicted.

The adaptive models do not rely on a physiological model of the human body, but relate e.g. comfort temperatures and ambient temperatures empirically.

In the view of the Passive House Institute, there is a number of strong arguments against the application of adaptive comfort models.

A comprehensible indication of how ambient conditions should influence the comfort temperature of people inside a building could not be found in any study. People do, of course, adjust their clothing to the interior temperatures (which in turn depend on the exterior temperatures for non-air-conditioned buildings), a fact that is already accounted for by the heat balance models. Often, vague references to physiological and psychological factors are used to justify the correlation.

It appears safe to say that physiological acclimatisation does not influence the comfort conditions, although it will influence the ability of people to withstand uncomfortably hot or cold conditions, thus changing the vote for a certain set of uncomfortable conditions as well as the width of the comfort range. If, for example, the indoor temperature in a subject’s general environment and in a particular building occasionally rises to 15 K above the comfort temperature, a 10 K temperature difference may result in a vote of +2 only, whereas the same condition would be rated +3 by a subject who rarely experiences such temperatures.

Then, there are some inconsistencies in the proposed use of adaptive models. 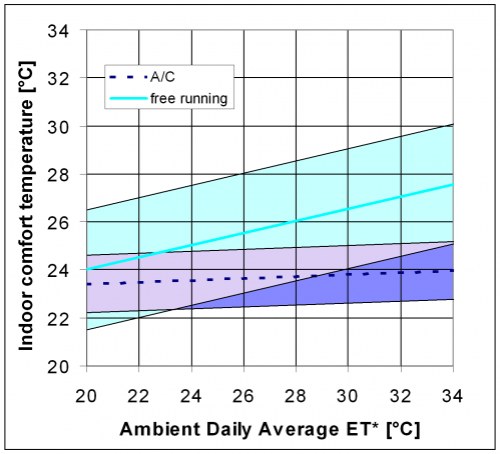 Contrary to this, in most studies adaptive comfort temperatures as a function of ambient conditions have been determined indirectly not only from actual votes “comfortable”, but from all votes in the experiment. In particular, for indoor temperatures far away from comfort (usually correlated with high ambient temperatures), where none of the subjects votes neutral, a linear relationship between the distance from the comfort temperature and the vote on the comfort scale is generally assumed. This procedure introduces a systematic error into the estimate of the neutral temperature which may be decisive. For example, [de Dear 1997] notes that users of air-conditioned buildings are twice as sensitive to changes in indoor operative temperature than users of naturally ventilated buildings.

Another important aspect of the RP-884 results is that air velocities in naturally ventilated buildings were often about 0.4 to 0.5 m/s, much higher than in air-conditioned buildings. This will reduce warm discomfort and thus change the votes for higher temperatures.

Part of the explanation may also be the so-called range effect. [McIntyre 1980] points out that, when exposed to a range of stimuli and equipped with a category scale, subjects will distribute the stimuli more or less evenly across this scale.

To summarize, the adaptive and heat balance models result in similar predictions over a relatively wide range of temperatures up to approximately 25 °C. This is also supported by [Fanger 2002], who reanalysed the data from the RP-884 database and found good agreement of the PMV predictions and the field measurements. The methodological basis that results in higher predicted comfort temperatures under certain conditions, however, appears very weak and cannot be accepted for design purposes.

Articles in the member area

Summary of the parametric studies for tropical climates