Special features and characteristics of components in contact with the ground

Basically the procedure for calculating thermal bridges in the case of components with ground contact does not differ from that for other thermal bridges. However, it is helpful if the effect of the ground on the building envelope is known, especially in terms of setting the linear thermal transmittance for the energy balance in the PHPP.

Influence of the ground on components in contact with the ground

The thermal interactions of a building with its surroundings are very complex. This applies especially for the system “ground”. Apart from the ground itself, this system is influenced by snow, frost formation, seepage and ground water. However, only the physical characteristics of the ground are relevant for the calculation of the U and Ψ-values of components in contact with the ground, given by:

Temperature and thermal conductivity of the ground

= 0). Heat follows the path of least resistance. 100 m of earth with a thermal conductivity of 2.0 W/(m•K) has a U-value of just 0.02 W/(m 2•K), so the relevant heat exchange only takes place towards the outside air. The heat flow caused by the temperature difference between the inside and the outside environment accordingly travels from the ground towards the surface through the building envelope, therefore the ground should be regarded as an additional component layer of the affected building component, the thermal conductivity of which influences the U-value of the component. However, the heat transfer resistance can no longer be determined in accordance with R = λ/d because the ground around a building does not represent a homogeneous building component layer. As a consequence, purely one-dimensional consideration is no longer sufficient. In order to take it into account despite this, special functions have been provided in the Ground worksheet of the PHPP which takes into account the insulating effect of the ground depending on the building size and the inclusive depth (similarly to the norm DIN EN ISO 13370).

Thermal capacity of the ground

In building physics, the thermal capacity of a material is given by the specific thermal capacity c. This defines the amount of energy that is required in order to increase one kilogramme of a material by one Kelvin. This means that materials can absorb a certain amount of heat and release this again depending on the changes in the applied temperature over time. The building envelope exhibits thermal inertia depending on its mass. An exterior wall which absorbs heat throughout the day releases it again during cooler temperatures. The greater the mass of the exterior wall is, the longer the charging and discharging process will be. For most building components this time interval is relatively small. If longer time intervals are considered, such as those for the monthly method, this effect is averaged out because the number of charging phases are the same as the discharging phases. Steady-state consideration of the heat flows is therefore quite adequate. This is no longer the case for building components in contact with the ground. The following illustration shows the temperature gradient in the ground as a function of the external temperature: 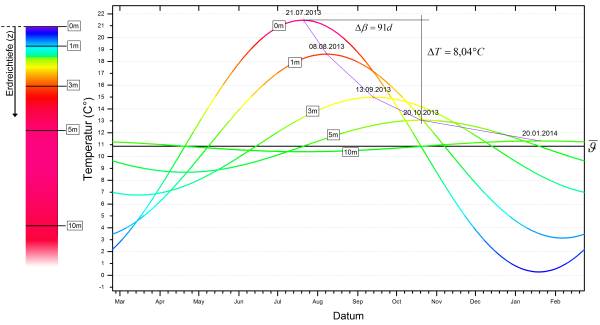 The amplitudes of the sinusoidal temperature gradients clearly decline with increasing soil depth. Simultaneously, a phase shift takes place so that external air temperature peaks reach the deeper regions much later on. The amplitude peaks of 21.5 °C (on 21.07) in the test reference years shown here only has an impact 91 days later at a depth of 5 m. Here the peak temperature was still 13.1 °C on 20.10. With increasing depth, an almost constant temperature at the level of the mean annual temperature is reached. The high phase shifts no longer allow a purely steady-state consideration of the transmission heat losses for the monthly method since the charging and discharging processes may extend over several months. Heat storage in the ground and the resultant damping action and phase shifting of the ground temperature under the floor slab is therefore of significance when calculating heat losses through the ground.

In the PHPP this problem is analysed using the principle of superposition. The sinusoidal gradient of the heat flow is divided into a steady-state

and a harmonic component

. Both parts can be adjusted in the PHPP by means of a linear thermal transmittance. In contrast with

must be adjusted using a harmonic linear thermal transmittance which should be determined by means of a transient state simulation; however, for simplification this can also be equated with the steady-state Ψ-value.

This video clip shows the temperature profile under floor slab of a building for three different cases:

The temporal course of the heat loss through the three floor slab types is shown in parallel.

Further literature on the topic of skirt insulation:

For calculating thermal bridges in the area in contact with the ground, a steady-state approximation suffices in many cases and dynamic simulation can be dispensed with. Although dynamic simulations provide more accurate results, they also incur additional effort. Moreover, on account of the usually only imprecisely known thermal characteristics of the ground, the expected accuracy of a one-dimensional or two-dimensional transient numerical calculation is not so high that this extra effort can also be justified (except in the case of large or research projects). Frequently, the Ψ-values calculated in a steady-state manner are therefore also used as harmonic Ψ-values (see the Ground worksheet in the PHPP). However, for thermal bridges of areas in contact with the ground which are far away from the ground surface, this assumption will usually be quite pessimistic. Whether it is worthwhile to perform a time-dependent calculation is easily determined by setting the harmonic Ψ-value in the PHPP to the same value as the steady-state Ψ-value one time, and equal to zero another time and then observing the influence on the final result. A steady-state calculation under the mentioned boundary conditions can also give pessimistic results with respect to the surface temperatures.