Svartbäcksvägen 11 in Bagarmosse, Stockholm, Sweden, is a case study from the EuroPHit project. It is a light concrete block villa from the 1950’s, being step-by-step retrofitted to the EnerPHit standard.

The first step was to make the basement habitable. For this, the old, non-insulated concrete floor was dug out and replaced by a new floor with 300mm FOAMGLAS® insulation in all rooms. As in many places in Sweden, the ground beneath this family dwelling is pure rock and also has high levels of radon gas emissions. An additional radon-shield was fitted, despite FOAMGLAS® board (if properly installed) already having radon barrier properties. This shield, plus the later installation of a MVHR system, will ensure that there is no danger from the radioactive gas in the house.

One of the main challenges when fitting a new ground floor to an existing building is to reduce thermal bridging to an acceptable minimum. This helps to avoid heat loss and condensation (which in turn may damage the building structure and/or cause mould growth). 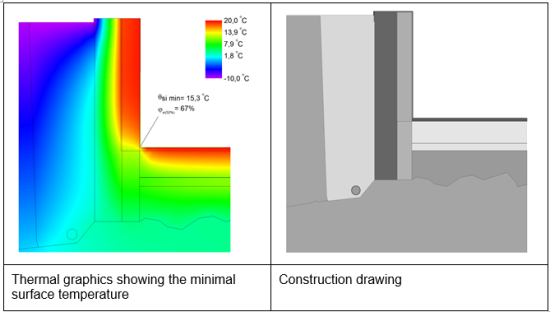 On the outside, the earth is dug out, new drainage pipes are positioned and the trench is filled with FOAMGLAS® gravel. Insulation boards with draining properties are fitted to the wall. The resulting Ψ–value of the wall/floor connection for the PHPP input is approximately 0.020-0.040W/(mK) –depending on the actual moisture content of the FOAMGLAS® pebbles.