You are here: Passipedia - The Passive House Resource » Planning and Construction » Refurbishment with Passive House components » Step-by-step Retrofits towards EnerPHit Standard in social housing in Spain

Refurbishment projects were not taken into account by the Spanish energy efficiency regulation Código Técnico Español, CTE) until 2013, when the CTE was updated, and till now comfort and efficiency are not measured in the compulsory technical inspections of existing buildings. There is a large number of buildings in poor conditions. Their dwellers do not enjoy adequate comfort conditions or need a huge amount of energy to reach them due to the lack of insulation, the bad quality of the envelope components as well as the old and inefficient facilities. This situation is called ‘energy poverty’ and affects many people i

2 Issues for Interventions in Existing Buildings, Especially in Social Housing 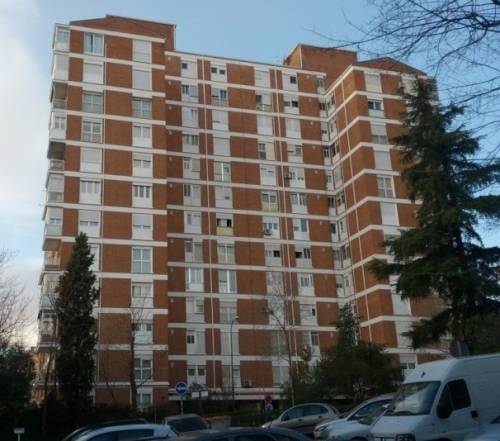 The low purchasing power of social housing owners, who cannot afford the cost of retrofit works, worsens the social housing refurbishment issues. Most of these social houses are not rented but owned. The fact each dwelling has a different owner makes it difficult to perform community retrofits in common areas because every change or intervention has to be ratified by the majority of owners. Furthermore, it is very common that the owners make improve¬ments in their dwelling or replace components at a certain point in time. These changes coexist with original components or with changes by other owners. It hampers the search for an integral technical solution for the whole building to achieve the EnerPHit standard requirements.

Refurbishment projects face an additional difficulty since during the works, unexpected situations frequently appear that require making a decision on the fly. Moreover, these retrofits are performed by small companies where no qualified technicians are involved. As a result, the implemented solutions are often not appropriate and the execution quality is deficient. Usually, no quality control is done at the end of the works, not even when these works are financed or subsidised with public money. Airtightness tests are practically unknown. In addition, it is very complicated to persuade owners to pay a qualified technician to do an initial study or project.

The first building energy refurbishments are now showing damages that did not exist in the building before. They become obvious shortly after finishing the works, usually in the first winter season, because not all relevant factors had been considered in the planning. Especially, ventilation improvements are usually not taken into account.

The works carried out within the European project EuroPHit helped us to understand the challenges that we are facing. We present here three social housing examples included as case studies or observer projects. Each example has been addressed from a different approach, allowing us to explore three scenarios: detached house, single flat and common areas of a residential building retrofit.

The Centón house is a low-budget detached house that has been vacant for some time (Figure 2). The current owners have done a refurbishment to prepare it for their present and future needs. As the owner cannot afford to undertake the works all at once, the refurbishment will be performed step by step. Most of the construction works will be undertaken by the owner (self-construction refurbishment).

First, a minimal refurbishment will be necessary to achieve basic living conditions. The retrofit works in this first step comprise the following:

• Foundation reinforcement and insulation under the basement

The building was not inhabited during the intermediate steps. The next step of the refurbishment plan could be the implementation of renewable energy sources. Additionally, future works will be undertaken in case the owners decide to use the building as a family house.

In this observer project, a single-flat in a social housing building (Figure 1) was refurbished from the inside to improve comfort conditions and efficiency as a first step of a complete refurbishment. The construction and building services are typical of the 1960’s and 1970’s in Spain, when the building was built (1968): reinforced concrete structure; external walls made of two layers of bricks with a 50 mm air chamber between them; central heating with uninsulated vertical distribution pipes (not by dwelling). The first step is taken at the flat owners’ initiative. They had just bought the flat and decided to do the retrofit before moving in. The works included in this first step are the following:

The first challenge at the design stage is the elimination of thermal bridges as far as possible. Most of the thermal bridges are eliminated by the construction of a continuous inner insulation layer, which is even passing behind partition walls (Figure 3). The exterior wall and floor structure connection thermal bridge is the only one that cannot be avoided at this stage. This detail is analysed to find a solution where hygiene issues are avoided (Figure 4).

The improvements of heating and cooling demands by using 4, 6 and 8 cm of mineral wool inner insulation have been calculated with PHPP software (Table 1). Because of the exterior wall and floor structure connection thermal bridge, the demand insufficiently decreased so that it is not interesting to contemplate about higher thicknesses, which would reduce the interior area of the flat. The mineral wool thickness chosen is 4 cm to reduce the heating and cooling demands as far as possible but above all to increase the surface temperature, raise the comfort and reduce the risk of condensation on surfaces. 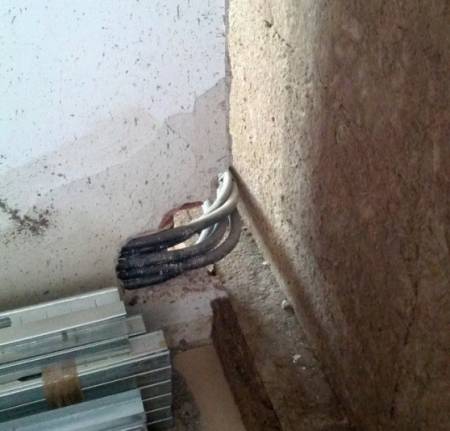 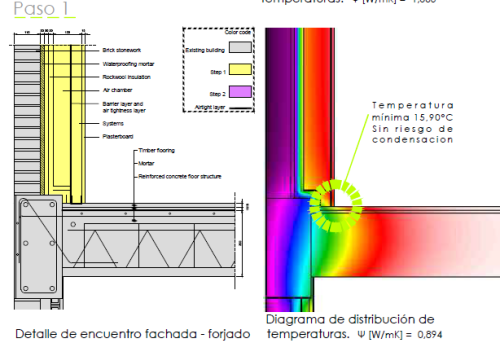 Figure 5: Improving airtightness: exterior wall – window connections; VAND arquitectura High-quality windows adequate to the Madrid climate and to the flat orientation are installed. (Uf = 0.98 W/(m2K), Ug = 0.5 W/(m2K), g = 0.35). Due to the south-west orientation, there is a high risk of overheating in summer. In addition to solar control glazing, roller shutters with electrical mechanism as protection against overheating. 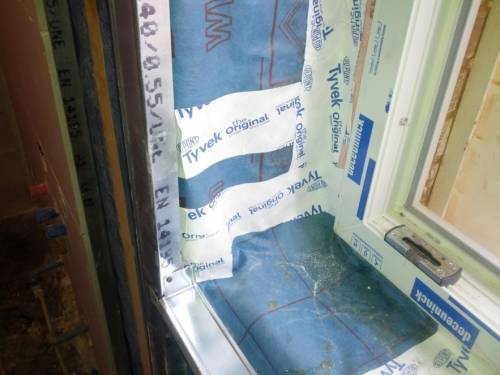 Airtightness is improved by polypropylene (PP) mem¬branes and adequate tapes in window connections and systems conduct passages (Figure 5). The pressurisation test resulted in n50 = 6.0 /h in the original state of the flat, and the measured test result after finishing the first step works is 1.67 /h. This result will be improved when the old entrance door is changed to a more airtight model and when the airtightness works between neighbouring flats are carried out.

The mechanical ventilation unit is located in the bathroom false ceiling, and the distribution ducts run though the corridor ceiling. Madrid City regulations do not allow placing outside elements, such as outdoor and exhaust air grids, on the façade. In the present case, an exception was granted since the building is located outside the historical city centre, but this can be an additional difficulty in other cases.

Since all the measures described above are related to works made on the flat from the inside and no common areas have been affected, neighbourhood association approval was not required. However, it will be necessary for the following steps (external thermal insulation composite system (ETICS), roof and basement ceiling insulation and thermal systems). The execution order of these cannot be specified since they will be carried out at the end of each component’s life cycle.

The heating demand of the apartment is reduced in the first step by about 70 %, but the impact on the entire building is minimal because of its size.

The apartment is inhabited since May 2015, and temperature, humidity and CO2 level are being monitored in three rooms (living room, main bedroom and kitchen) since October 2015. Monitoring results (till January 2016) show that the apartment was heated only by the three uninsulated heating pipes, which go up to upper floors. The room temperature is about 22 °C. Central heating systems in Madrid start working on November, 1st. During the first weeks, the interior temperatures were too high so that it was necessary to open the windows to avoid overheating. The humidity levels are below 50 %. CO2 levels are below 1000 ppm most of the day. 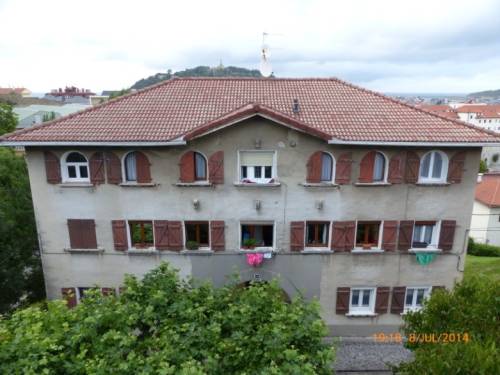 What was initially planned as a simple façade retrofit of a 10-dwelling building from 1953 (Figure 6), became a comprehensive high-efficiency energy retrofit together with other measures to reach the EnerPHit standard. These modifications were initiated thanks to the awareness-raising work done for months by the technicians involved in the project.

Some difficulties arise because the work is done in the interior of the apartments, while the dwellers are still living in them during the retrofit process. In particular, the airtightness improvements have to be made between the original wall and the ETICS. The retrofit works that will be undertaken in the first step of the refurbishment plan are the following:

The building is located in a neighbourhood where most of the buildings have the same characteristics. All of them must be repaired in the next few years, so it would be interesting to set up a protocol for all of them.

Barriers to carry out comprehensive energy refurbishments in social buildings are very high in Spain. The improvement of these buildings has a huge impact on the reduction of atmospheric emissions in Spanish cities, even if done step by step and apartment by apartment. Madrid, which has presented air pollution levels above the recommended in the last months, could reduce the central heating use drastically with simple measures that most of the owners can afford.

Dissemination and awareness-raising works in neighbourhood associations are necessary to help owners to understand the effect of these simple measures and the quality that the works require.

Furthermore, the creation of protocols to increase the quality of properties and the reduction of central heating and air conditioning use must be encouraged by the government. A strict control of the money to subsidise energy efficiency measures is essential to ensure success.