Functioning of Passive Houses in cool temperate climate has been proved extensively in different theoretical and practical research studies in the last twenty years. The very good results of these living experiences has contributed essentially to the success of the standard worldwide. With the actual phase of diffusion of the standard in different climates, the question arises whether the standard set of solutions elaborated for central European climate also guarantees this excellent functioning in different climates all over the globe. The present contribution gives a first insight into the real functioning of two residential Passive Houses in Mediterranean summer, where the author has been involved as a Passive House designer. This findings are understood as a small part of a puzzle that should respond to the often heard doubt of Mediterranean experts, stating that Passive Houses are not the right building standard for the Mediterranean summer. 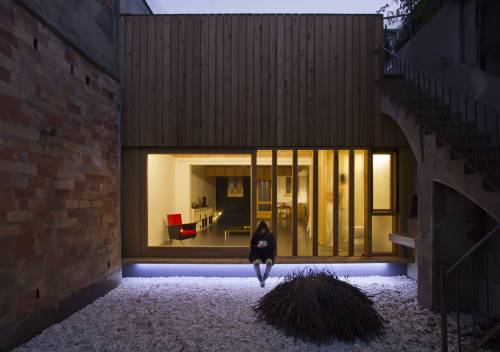 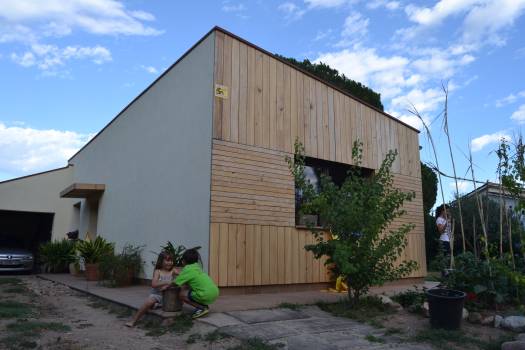 MZ House is a mid of terraced house in a northern district of Barcelona. The district is characterized by low density, urban structure. The one story terraced house is situated closely to a busy highway. The beach of the city is about 6 km away. Typical Mediterranean climate of Barcelona has an average temperature of 24-25 ºC in August, combined with an average relative humidity of 60-70%. MZ House is the result of a retrofit process finished in 2012, based on Passive House criteria. The original building dates from 1918, and has been converted from very basic thermal conditions in winter time (heating demand 171 kWh/m2a calculated with PHPP) to an almost Passive House (17,5 kWh/m2a). The calculated summer comfort in both cases (before and after retrofitting) remained at 10% overheating frequency, with 26ºC as reference, and 14,7% with 25º C as reference temperature. The building has about 70m2 of treated floor area, being the garden and living side oriented toward northeast, meanwhile the street side have only two small openings, with large shadowing. To reach the Passive House criteria, a new rooflight has been designed, with a south-western orientation. Insulation of walls between 14-18cm, roof 28cm and floor slab 6cm has been added. Simple wooden window frames (90mm; 1,1 W/m2k) and double low emission glasses (1,1 W/m2k; g-value 0,58) has been installed suitable to Med-climate comfort conditions. The resulting thermal inertia has been estimated as very low, as the envelope components are composed by wooden beam structure (garden side and roof) and interior insulation (street side and laterals). A Passive House certified HRV-ventilation system guarantees the fresh air requirements. Due to complex constructive conditions, the building airthightness reaches “only” an n50 value of 2,3/h. The user of the building is a four person family, highly aware of energy saving measures. In both of the analyzed years, 2013 and 2014, the family left the building unused during 6 weeks of summer (middle of July till end of August), so the comfort analysis has been concentrated during occupancy of the building: June, first mid of July and September. Concerning the ventilation strategy, the mechanical ventilation has been kept running through all the occupancy time with standard intensity rate (30 m3 per hour and person). Further, due to highly usage of the garden, the children kept open during large time of the day (school holidays) the big opening toward the garden. In summer night, an intensive natural cross ventilation has been performed. The above mentioned rooflight, until now without any external sun protection, has been covered temporarily. No active air conditioning has been installed.

Measured results and analysis of data

Two years of monitorization have been registered: Next to internal and external temperatures, also relative humidity and CO2 concentration. No radiation data was available.The CO2 concentration never exceeded 1000 ppm of CO2. Internal air quality is not matter of this analisis.

The following questions are discussed concerning summer comfort, always regarded during usage phase of the dwelling:

Average exterior temperature of summer 2013/14 had been 22,60 / 23,28 ºC, meanwhile the PHPP official data for Barcelona is 23,6ºC. The measured average indoor temperature is 25,2ºC for 2014 and 25,5ºC for 2013. The correspondent overheating frequency above 25ºC during usage phase is 13,0% in 2014, and 14,3% in 2013. PHPP calculated 14,7% with a typical Barcelona summer. This result shows that the building is performing beyond the allowed level of comfort after Passive House design principals. Curiously, the owner didn't complain about the high temperatures, but rather a too humid indoor climate.

The collected data have been organized and compared following the ASHRAE RP-884 study outcomes. This study uses more than 22.000 data sets from 160 buildings in different climate zones, most of them situated in hot climate. As a conclusion, the study concluded in the following formula, resulting in an acceptability of 90% (buildings without AC): Tconf = 18,9 ºC + 0,255 * outside temperature ± 2,5. Different comfort parameters, as clothing, metabolic activity or air velocity are not known for this comparison, so the presented figures have to be analyzed with a certain caution. In Figure 2, room temperatures depending on exterior temperatures are shown, also upper and lower ASHRAE-RP-884 limits and the proposal of the PHI for the upper comfort limit. A very good behavior of temperatures of the dwelling is stated. Only very view hours have crossed the critical 26 ºC. The same situation is detected for summer 2014 (Figure 3).

Figure 2. Registered room temperatures in summer 2013, during occupancy of the dwelling

Figure 3. Registered room temperatures in summer 2014, during occupancy of the dwelling

What happens during a heat wave during summer? The building has no thermal mass, as stated above. Following ISO-EN-13790, a lightweight envelope is assumed with a 20 hour time constant. Therefore we look closer at two weeks in summer 2013 and 2014: Figure 4 shows that the phase displacement of temperatures are about 5 hours, quiet low compared to what EN-ISO-13786 suggests as minimum value of 10 hours. During the studied period, we notice that the building responds to sudden temperature changes within less than 20 hours. The same phenomena is repeated for the year 2014 (see Figure 5: 13th September).

Description of building and site and user behaviour

Pineda House is a one story detached house situated in Palau, a small city close to Barcelona, with a distance of 17 km to the beach. The weather is similar to Barcelona, even though daily temperature oscillation are more pronounced, dropping down till 14-15 ºC (in Barcelona 17-18 ºC). High humidity rates are stated, due to a close small river. The building has been certified as a Passive House in 2014. The passive building solution are very similar to the MZ House, but no rooflight has been designed. All windows have efficient sun shading blinds. Thermal inertia due to wooden beam structure is unavailable. The user of the building is a 2-person family, highly aware of energy saving measures. Similar to MZ House, the user left the building during August, so the comfort analysis has been concentrated during rest of summer time. During occupancy, the mechanical ventilation has been reduced during daytime (people at work) at a minimum rate (15 m3 per hour and person). Being at home, the user switched to standard ventilation rate and opened the windows at night for natural cross ventilation. The installed Air Conditioning has not been used this first summer 2014.

Measured results and analysis of data

In Figure 6, a very good behavior of temperatures of the dwelling is stated. Only very view hours have crossed the critical 26 ºC.

Figure 6. Registered room temperatures in summer 2014, during occupancy of the dwelling

Similar to MZ house, a closer look into one week in summer 2014 (during occupancy) (figure 7) shows curiously very constant temperatures of the building, due to an optimal behavior of the occupants (blinds consequently closed during daytime). On the other hand, punctual observed phase displacement of temperatures are very low (only 3 hours).

Although time constant for the studied light weight dwellings is not higher than one day in summer, and the phase shifting of temperatures are quiet low (3-5 hours), curiously the 2 dwellings perform excellently on means of comfort. Figure 8 shows that temperatures only exceed during very few hours the 27 ºC frontier. However, it is interesting to further study whether a higher thermal mass could damp better weather oscillations and improve the behavior of such buildings. Also relative humidity seems to be an issue that should be studied with more detail, as shown in the lower graph, with a certain amount of hours in MZ house beyond the extended comfort limits. This is confirmed by the users, stating too high humidity inside of the dwelling. Anyway, this issue is not a specific Passive House problem.

Figure 8. Comfort limits as a function of internal temperatures and relative humidity

The Passive House in summer

Solutions for high outdoor air humidity in the summer