Definition and effects of thermal bridges

Heat makes its way from the heated space towards the outside. In doing so, it follows the path of least resistance.
A thermal bridge is a localised area of the building envelope where the heat flow is different (usually increased) in comparison with adjacent areas (if there is a difference in temperature between the inside and the outside).

The effects of thermal bridges are:


Both effects of thermal bridges can be avoided in Passive Houses: the interior surface temperatures are then so high everywhere that critical levels of moisture cannot occur any longer – and the additional heat losses become insignificant. If the thermal bridge losses are smaller than a limit value (set at 0.01 W/(mK)), the detail meets the criteria for “thermal bridge free design”.

If the criteria for thermal bridge free design are adhered to everywhere, the planners and construction manager don't have to worry about cold and damp spots any more - and less effort will have to be made for calculating the heat energy balance.

Thermal bridge free design leads to substantially improved details; the durability of the construction is increased and heating energy is saved.

In [DIN10211] (Thermal bridges in building construction – Heat flows and surface temperatures - Detailed calculations) there are numerical procedures relating to the calculation of thermal bridges. Here, a thermal bridge is defined as follows (Section 3.1.1):

A general overview is possible if the procedure for determining the transmission heat losses $H_T$ of the building envelope is considered. The following equation in the norm DIN 14683 (Section 4.2) makes a distinction between one-dimensional, two-dimensional and three-dimensional heat flows.

Planar regular building components such as the roof areas and exterior walls have the largest share of the total heat flow. For these, heat transfer can be considered one-dimensional with good approximation. The reason for this is that no cross-flows occur in them on account of their homogeneous layered structure. The heat transfer coefficient is defined in the norm [DIN6946] and can be calculated with little effort using the familiar equation given below:

The two-dimensional and three-dimensional heat flow proportion of the building envelope is expressed by thermal bridges. They are defined by geometric, constructive and/or material modification and usually exhibit a higher heat flow rate and lower surface temperatures than adjacent standard building components. They occur particularly at the component joints, edges, transitions and penetrations of the standard building components. They are depicted by the linear thermal transmittance $\varPsi$ with the unit W/(mK) and the point thermal transmittance $\chi$ in W/K. 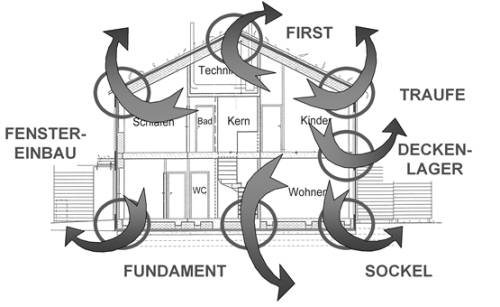 In principle, the actual share of the thermal bridges in the transmission losses of the building envelope can only be stated if the Ψ-values are calculated for a specific building. It is assumed that heat flow simulations are associated with an uncertainty of ca. 5 %, other methods such as the use of thermal bridge catalogues are even associated with an uncertainty of up to 20 % (DIN EN ISO 14683, Section 5.1). For Passive House buildings, the use of thermal bridge additions is not advised because they lead to overestimation of the heat losses.

However, in general it is not possible to state how high the heat losses due to thermal bridges actually are. Their type and number are too individual and therefore depend on the respective building. For example, thermal bridges do not always have to have a negative effect on energy balancing; in the case of efficient new constructions, particularly in the area of Passive House buildings, taking the Ψ-values into account can certainly reduce the space heating demand. In the case of existing buildings and modernised building stock, thermal bridges generally have a negative effect and according to [EnerPHIT], experience has shown that this can result in an additional heat loss of up to 20 %. Based on examples of different construction projects, this resulted in an increase in the annual heating demand of up to 14 kWh/(m²a). Careful planning with regard to thermal bridges can therefore be decisive for achieving the Passive House Standard in a construction project.

Effect on the building structure

Mould in a corner; this is caused by the thermal bridge - we won't allow for such bad design in a passive house, so we won't have that

Unlike with regular building components, at thermal bridges the heat flow density changes and usually results in a reduction in the surface temperature on the inside in that area. This effect is more pronounced because air circulation in corners and edges is restricted. Cupboards and other furniture not only disrupt convection but also restrict radiant exchange with the surroundings. Because the water vapour content of the air depends on its temperature, condensation may form on the affected areas.

The resulting condensation can penetrate further inside the construction due to the capillary action of the building materials, and the thermal conductivity may increase and thus the building component may almost be saturated. It will not be possible to avoid moisture damage to the building structure and mould growth may occur. However, large-scale damage is generally associated with errors in the planning, implementation and utilisation of buildings and is not a problem that is solely related to thermal bridges. These are only the points where the problems originate in the first place. Nonetheless, the risk of mould fungus to the inner surface of thermal bridges and the resultant toxic effect on occupants must be considered separately, especially since mould growth already occurs at a temperature higher than the dewpoint temperature without condensation being present. For a building physical analysis of the model, formation of mould can be assumed if relative surface humidity levels of 80 % prevail for a duration of 12 h/d (Technical Report 4108-8).

In constructions suitable for passive house or EnerPHit-design, thermal bridges with such catastrophic consequences are generally avoided; we won't allow for such bad design in the recommended constructions, so we won't have that. While there can still be thermal bridges with some remaining heat losses1), such massive temperature drops can always be avoided. A big part in avoiding catastrophic thermal bridges is the improved insulation level already for the regular components. This leads to a generally higher level of indoor surface temperatures to begin with, already reducing the risk. Internal insulation, however, is a special case in which there are even more stringent rules “how to avoid thermal bridges of the catastrophic type”.

Requirements the current rules for engineering practice (DIN 4108-2) rule out the risk of mould near thermal bridges if the minimum surface temperatures under the mentioned steady-state boundary conditions do not fall below 12.6 °C. This corresponds with a $f_{Rsi}$ factor of 0.7:

The higher the $f_{Rsi}$ factor is, the less the likelihood of mould growth will be. For Certified Passive House Components, the request to the $ f_ {Rsi} $-factor depends also from the climate.

1)
which have to be accounted for
basics/building_physics_-_basics/thermal_bridges/thermal_bridge_definition.txt · Last modified: 2022/07/30 14:50 by wfeist