In new constructions, walls, roofs, and other external building components are built up from scratch. As these components are assembled, additional insulation can be applied without incurring extra costs for the scaffolding, plaster or facing etc…

Most existing buildings were built in the days when heating energy was much cheaper than it is nowadays. The substance of the building is subject to constant changes including essential maintenance procedures and the modernisation of outdated buildings. Each of these measures offers the opportunity to adapt inadequate thermal properties of the building to future requirements. Again, thermal insulation measures can be combined with the maintenance measures which are necessary in any case.

A recent microeconomic study carried out by the Passive House Institute deals with the question of the cost-effectiveness of these measures from the investor's point of view. Even though this study is based on the general conditions in Germany which will vary depending on the specific energy prices, construction costs and climatic conditions of the region in question, it provides a general idea of the relationship between the initial investment for energy efficiency measures on the one hand and the savings in energy costs associated with these measures on the other hand. [Kah, Feist 2005] .


Within this context, the inferences for Germany are clear:


With the particularly reasonable development loan from the the KfW Development Loan Corporation, the results are even more favourable. Improving the thermal protection means that money is saved year after year; the financial burden due to the loan is much less than the savings in energy costs.

The table also shows that more is better: economising on the insulation thickness in particular does not pay off. Thicker insulation is only slightly more expensive; the greatest part of the investment costs consists of the basic costs for scaffolding, repairs, new plaster or new roof covering, detail adjustment etc… In contrast, the additional costs incurred for more insulation are small, but only if it is applied right at the start. Improving the insulation later on will again incur basic costs for scaffolding etc., this can hardly be economical.

The decisive principle which applies to thermal protection is

If it has to be done, it should be properly done – don't save on insulation thicknesses! 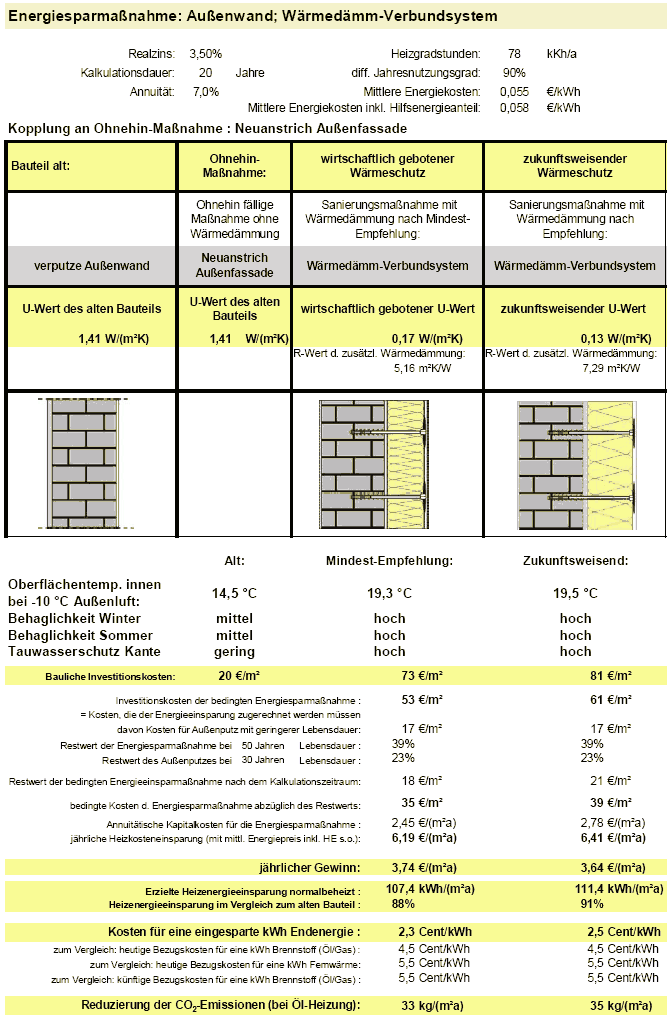 Increased energy efficiency through better thermal protection is one of the most profitable “energy sources” today. The initial costs of these measures are even lower than the costs for normal fossil fuels. The value creation due to thermal protection measures will occur almost exclusively in the domestic economy, and will mainly benefit medium-sized businesses; the businesses located here have a high concentration of employment, so that consistent mobilisation of the economic potentials as shown here will have a significant employment effect.

Given this win-win situation, an active initiative for improving the quality as well as the rate of implementation was strongly recommended in the study (see Literature). With the KfW Development Loan Corporation’s new conditions for interest, such an initiative has now been taken: with interest rates that are 2 to 3 % below that of the market rate kfw-Program (Internet page of the development corporation), it becomes even more economically feasible due to the amount of interest saved.