Stacken, a classic Swedish ‘million program’ building with 35 apartments in Göteborg (Gothenburg), which has long been run as a cooperative, will demonstrate a cost effective step-by-step deep retrofit with building integrated solar photovoltaics (BIPV) on the façade and roof. The goal of the project is to show the positive synergy effects of installing building integrated solar at the same time as achieving the last steps of a step-by-step retrofit to Passive House Standard. The scope of the project includes that the existing concrete façade will be externally insulated and covered with thin film solar modules and more effective crystalline solar modules will be installed on the roof. New Passive House-certified doors and windows will also be installed and demand controlled ventilation coupled to a heat recovery unit and vacancy sensor based lighting will be installed throughout the building. Finally, sensors to collect data from cold and hot water, ventilation flows, electricity and temperature / humidity from each apartment will also be installed.

The project is led by members of Kollektivhuset Stacken in collaboration with its partners Chalmers Tekniska Högskola, Passivhusbyrån, and Helhetshus architect studio. Financers include Naturskyddsföreningen, Energimyndigheten and Västra Götalandsregionen.

The ‘million program’ buildings are a name given to the (mostly) masonry buildings built in the 1960’s and 1970’s to reach a goal of one million additional homes in Sweden [1, 2]. Needless to say, these buildings are in great need of renovation today, and that poses both a challenge and an opportunity [3]. The current political goal in Sweden is to be near net zero greenhouse emissions by 2050. But there is a lack of cost-effective solutions that both reduce energy demand and generate renewable energy. This project will demonstrate that it is cost-effective to combine renewable energy with BIPV and reduced energy demand through a step-by-step retrofit on ‘million program’ buildings.

The potential is large if this project succeeds, both because the ‘million program’ buildings (similar to many masonry structures built all over Europe in the mid-late 1900’s) are now in great need of renovation, and because the suggested concept is energy-effective and economic. That is to say, that with further spreading of this kind of project, the costs for renovating other similar buildings could fall to the level that no subventions would be needed for such projects to become economically attractive.

This deep energy retrofit of Stacken is a good example for the EuroPHit project (Figure 1) – which promotes thorough planning of step-by-step retrofit approaches to the EnerPHit Standard [4]. In this demonstration project, since it is deemed feasible, performance is planned to surpass the EnerPHit criteria (surpass space heating demand by max. 25 kWh/(m2a) and airtightness of n50 = 1.0 /h) by renovating to the “full” Passive House Standard (15 kWh/(m2a) and 0.6 /h, respectively, or better). 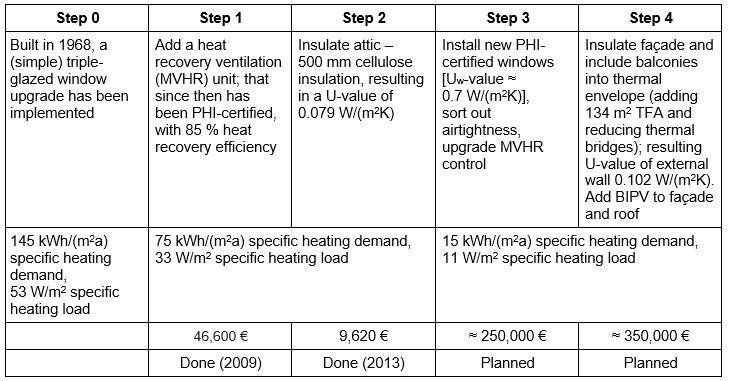 The renovation to the “full” Passive House level is planned (and has already partially been implemented) with the steps depicted in Table 1.

The treated floor area (TFA) is measured according to PHPP regulations, and the pressure test result is estimated (since the windows were replaced 27 years ago and the building envelope is generally relatively airtight) (Figure 2).

In 2009, a mechanical ventilation system with heat recovery (MVHR) was installed. It is a model which has since been certified by the Passive House Institute. It has no special control and only ensures fresh air supply with heat recovery. Additionally, in 2013 the attic was insulated with 500 mm cellulose fibre (cold attic). These upgrades have already reduced the heating demand to roughly half of the original amount – as was verified by reduced energy bills over the last few years.

The cost per square meter for amorphous silicon (a-Si) thin-film solar modules is approximately 25 €/m², at the same level as alternative façade and roof materials, and less than one quarter the price of crystalline photovoltaic per area. Including the entire cost of the photovoltaic system and the wall assembly (i.e. inverters, cables, insulation) and labour for installation, the investment is around 200 €/m². For a plastered wall, the investment cost is approximately 100 €/m² (material and labour) and a wood façade is about 70 €/m² [6]. In this sense, the cost for the solar array can be as little as 50 % of a traditional non-building integrated solar array if one only counts the cost for the inverters and wiring since the solar modules can be considered a façade material (that would be needed anyway when applying external insulation). Maintenance cost has not been investigated separately but it should be similar to that of a conventional façade.

The façade in this project is planned to be a thin film solar cell with a conversion efficiency of 7–8 %, while on the roof above the existing roof material, a crystalline module with 14–16% efficiency will be used (Figure 3). Another advantage with thin film modules on the façade (other than the lower cost per square meter) is that they also perform well under shading and in diffuse light. Total electrical production from the roof (38 MWh/a) and façade (86 MWh/a) is expected to be approximately 124 MWh/a, compared to a predicted demand of 105 MWh/a (Figure 4).

Figure 4: Typical electricity production from the BIPV compared to expected demand from the building

The a-Si modules are attached with screws and an external aluminium extrusion to the furring (that is part of the chosen façade insulation system), running vertically up the façade and rest on L shaped fittings also screwed into the furring. Using point fasteners to hold the modules in place may have been a simpler solution, if not for the reason that FEM modelling showed that the wind load would pose a risk of breaking modules at stress concentrations near the fasteners. Because of fire regulations on buildings higher than eight stories, the furring is made of metal. Wood furring would have been preferred considering the environmental impact. On each side, the glass is protected from the mounting system parts by foamed EPDM rubber strips (Figure 5). On the roof, the mounting system is similar with the main difference that modules are overlapping so that water will move from the module above to the one below. 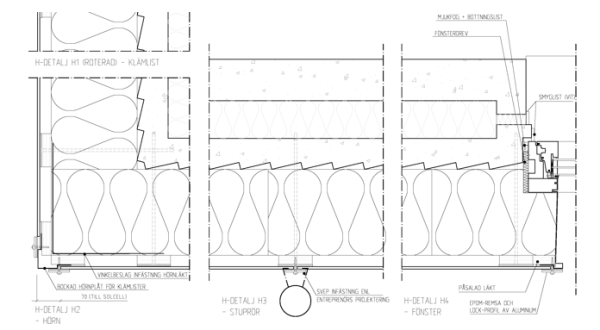 In summary, we project that a step-by-step deep Passive House retrofit approach to an approximately 50-year-old 9-story ‘million program’ building can be done at a cost of approximately 200 € per square meter treated floor area, and results in a building with greater thermal comfort that has net positive energy production. An example of such a project in a Scandinavian climate with a relatively poor solar resource suggests that this approach would be even more feasible in areas with better solar resource and a better match between solar radiation and electricity demand across the seasons.